You want to move forward in your life and business as a healer, but something is holding you back. Do you feel like there’s some barrier that’s restricting you and you can’t break through? You’re finding yourself stuck – like you can’t move on, and maybe you’re starting to feel like giving up. You’ve tried everything to upscale your healing business, but nothing seems to work. You’re beginning to accept that you just can’t do it. But guess what? You can. You can move forward and upscale your business as soon as you identify the limiting beliefs that are standing in your way. These self limiting belief examples are real and they do hold you back from reaching your full potential. Is it time for you to set yourself free from these limiting beliefs and move forward? So, what are the 3 most common limiting beliefs healers have? Let’s find out!

There are many beliefs that we create all throughout our lives. From a young age, we take in certain beliefs. Some of those beliefs are good – like believing in family, doing good work, and beliefs surrounding a particular religion. But, what we don’t realize is that from a young age, we also take on the beliefs of those around us – usually our parents, siblings, or maybe our grandparents. And we make those beliefs our own – whether good or bad. And though they mean well, these people in our lives speak without filters and don’t realize that

what they’re saying may be instilling negative beliefs into us as children. These beliefs stay with us throughout our lives, and often, hold us back from reaching our full potential because they restrict what we can do, who we can be and what we can have.

One of the most common self limiting belief examples for healers is around money. They say money is the root of all evil. Well, it is if that’s what you believe. As healers, we often feel we don’t deserve money – that if we ask for money in return for our services, we’re wrong or bad. How many times can you recall yourself saying, “My business will never grow,” or “They’re so lucky! I’ll never make that kind of money.” More times than you can remember, right?

In saying these things, you’re setting a limitation upon yourself. You are actively telling yourself that you don’t deserve the money. You genuinely believe that you won’t ever make enough to support yourself. You’ve got a glass ceiling hanging over your head, and although you can see through it, you believe you’ll never break through it. Your dreams are simply out of reach.

Now, I want you to think back. How often did you hear the adults around you say these things about money as you grew up? This is a classic example of taking on the beliefs of others. But just because they had limiting beliefs about money and how they valued themselves, doesn’t mean you have to! I can guarantee you that you can reach the heights you wish – if you just clear a path and remove those old, outdated beliefs that are holding you back! Sometimes, this requires clarity on how and what you’re working toward and what missing pieces you must fill in to get there. (If you want to explore this more, take our free Living In Alignment quiz below.)

Limiting Beliefs about Self

Answer this… do you believe in yourself? Do you ever tell yourself that you can’t do something like sell your services or be a good salesperson? And maybe that’s because you feel like an impostor 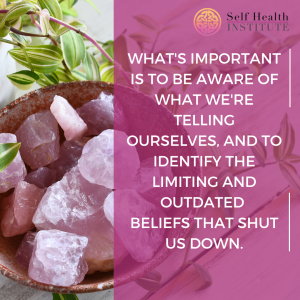 and believe you’re just not good enough or that you’re fooling people. Well, the second most common self limiting belief examples are your beliefs about yourself.

Some time ago, we worked with a client that believed she couldn’t make sales for her business. She wanted to move forward with her business but thought she couldn’t because she was a lousy sales person. And as a Feldenkrais practitioner, it was virtually impossible for her to make money without telling potential clients how she could help them, how much it would cost, and then asking them to pay for her services.

She turned to us for help, and using our CoreTalk Holistic Therapy,  we identified a limiting belief that was holding her back from making offers to clients. As a child, her mother had always talked about salespeople being slimy. So as an adult, she had this belief, instilled from childhood, that salespeople were slimy. Discovering this limiting belief was like an epiphany! We were able to clear the belief from her mind and body and instill a new belief within her that she was an outstanding practitioner and that offering her service was a gift to others. She no longer had the limiting belief that had held her back from success.

You see, by telling yourself you can’t do something, you’re setting limits to what you can do. And unless you stop setting these limits, you’ll only grow as much as you allow yourself to grow.

Limiting Beliefs About the World

The third most common self limiting belief examples are about the world around you. We know from experience that the thoughts of others can have a massive impact on how we view ourselves and the world around us. We often hold ourselves back from doing something, becoming better, and reaching new heights because we’re worried about what others will think about us. So many times, we’re influenced by other people who tell us we can’t do something, but it’s because they’re afraid of it or have that limiting belief about themselves. But that doesn’t mean you have to be restricted by their limitations. Do you want the world to set boundaries for you? That’s not why you’re here. You are a diamond in a sea of rubies and sapphires. Let yourself shine! 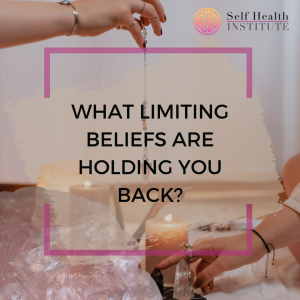 Reaching Beyond Your Limiting Beliefs

If there’s a will, there’s a way. If you genuinely believe you can move past your limiting beliefs, you can and will! Identifying those beliefs is the first step. We found this article to be quite helpful in identifying some things we say to ourselves that fit into the 3 examples of limiting beliefs we discussed here.

We believe in you and know it’s your time you break free of the glass ceiling hanging over your head. If you have outdated beliefs that you feel are holding you back, it’s time to address and release them, get them out of your mind and body. Check out our short quiz – Living in Alignment – to figure out what steps you can take to become more aligned, move past your limiting beliefs and become a better, more abundant version of yourself! Remember, you’re never too big for the world to handle!

How To Overcome Impostor Syndrome and Procrastination

How To Overcome Impostor Syndrome and Procrastination

The Many Uses for a Pendulum in Business